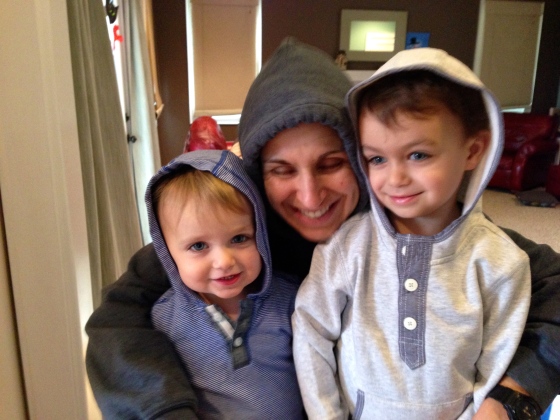 There is a canyon as deep as it is wide that separates the land of two children from the dizzying expanse of three or more. A family with one or two children is lovely and mostly manageable and can be contained at almost any table and within any vehicle. When you start adding more than that, words like lovely and manageable take on a different kind of meaning. In every conversation I’ve had with parents of larger families (and there have been many bc if I see you with three or more kids I’m talking to you, full stop) the third child is the tipping point. The game changer. Once you’re outnumbered, adding a few more players to their team matters little. You have a big family.

And that is where I have been for the entirety of the year thus far. Wandering around blindly within that divide. Trying to see my family  more clearly. Grappling with the question of whether we are a family or a BIG family. While my wife has been certain of her desire to live in the land of the big family I’ve not been so sure. This has been an interesting experience for us, this being on separate pages. We’ve been united in our feeling that we’ve got another one in us, however in a (for me) unsettling role switch, my wife has been able to leap right into “Let’s do it!” while I’ve been paralyzed in “But how?”. I’m not talking here of the mechanics of baby-making, but rather the daily concerns of maintaining some level of sanity (how much is enough really?) and fostering a sense of safety and well-being for everyone under our roof. Most of the time I just can’t see it. These are challenging goals in our current configuration as a foursome, so what could that possibly look like should we become five?

We don’t know. We have absolutely no idea.

Of course we don’t.

We didn’t know when we had Yogi and we still didn’t really know when we had the Monk. We’ve been entirely clueless about the whole thing because there IS no way to know. I can’t say that I approve of this particular law of the universe but that matters not at all. It is just true. This family business isn’t rational. It’s all heart.

I can wander around forever and I’m never going to figure it out, so I’ve decided to stop wandering. (See, there are certain decisions that can be made rationally!) I’m finally sitting down. Snuggling in right beside my wife who has been waiting here for me, knowing I would find my way eventually. We’re going to do it. As it happens, our family is a big one.

In the beginning. Seven years ago.

I’m beginning to find babies impossibly lovely. I’ve even volunteered to hold a few in recent days. Just last week I was forced by the cuteness of a teeny, tiny little dress to stop my cart and ogle in the newborn section of Target. Yikes!!!

This is dangerous territory for a few reasons. The first is that we haven’t actually decided to have another. Not officially. My falling in love prematurely with the idea of a family of five spells disaster. I fall hard and am mulish in my commitment to what I love.  And yes, it is very possible to fall in love with the idea of something. In truth, the idea of a thing is often much easier to love than the thing itself. What I’m saying is that I’ve got to watch myself here. Tread lightly.

We talk about a third with a frequency that I imagine is fairly telling given that our conversation time these days is sadly brief, but we’re still thinking. This is because at the core, we are both practical sorts. Practical and risk-averse and more than a little enamored with safety and security. Two children feels comfortably practical; three feels not that way at all. Three means more of everything. More mess and more chaos and more money and more time outside of any kind of career. But…. I can’t stop thinking about it. We can’t stop thinking about it.

I’ve noticed something else lately though. Something beyond the obvious symptoms of a resurgence of baby fever. When my mind is quiet and begins to wander towards this bright baby possibility I immediately hear this song loud in my ears and it feels like a summer seven years ago.

Without the distraction of the academic year I finally had time to focus on what I was doing with my life. Time to think about my (then) girlfriend and what we were building together and how the building was hard from such a distance (we lived in different states) and how we had likely gotten as far as we could get in our current configuration. How I was at the very beginning of my career at a university that was everything I had been working towards for so many years and how her training was far from over. I was thinking about the four long years she was committed to being right where she was. A place that was hours and hours and hours from me.

I spent hours alone in my car that summer. Driving and thinking and crying and listening to that song until I knew what to do next. When I was sure, I wrote her a letter. I gave her the letter in person, but still it was a letter. In it I told her that it was time for me to make a move. That assuming I could find work (a HUGE assumption) I was leaving the city where I had spent my last twenty plus years to continue building something with her. I stumbled all over myself to explain that I could find my own place and in so far as such a thing was possible, my decision was not something she was responsible for. We would not force it just because I had made this move. I was taking that other foot off the floor because it was what I needed to do next. I wasn’t sure what would happen after that, but for maybe the first time in my life, I wasn’t worried.

The seven years that followed have taught me that when you know a thing deeply, you have only to follow along behind it. To listen and trust. Even when that thing seems crazy and impractical and more than a little unwise. Somehow in the space of less than two months following that letter, I resigned from my job, found another one, and moved in with my girlfriend. Thirteen months after that we got married.

So, I’m thinking the idea of this baby is like that. For now my wife and I are driving around in the car, thinking and listening and crying (me). For whatever reason, thinking and crying often go hand in hand for me. We’re giving it some time. Trusting that when it’s time, we’ll know what to do next.

In the moments following Monkey’s birth, my wife and I were drinking him in and snuggling and enjoying the quiet exhaustion that follows a long labor when she whispered “I think we should do this again.” Now I’ve never given birth, but I would imagine this is an unusual statement for a woman who has spent the last three hours pushing (while tearing), delivering a baby and having the tear repaired. On the other hand, maybe it’s not that unusual. Endorphins are unbelievably powerful. Whatever the cause, she said it and later conversations revealed that she meant it.

It’s not the most practical line of conversation, but love isn’t practical. There is something that feels right about a family of five. For both of us. Although I haven’t had it in years, during my twenties I had a recurring dream involving three boys and a grocery cart. One skipping along in the aisle ahead, one crouched in the cart with the groceries and a baby giggling and drooling in the seat. And of course, that baby had the bluest eyes. That dream has given me a lot of years to think about having three children, but I never imagined that it would be something that would feel right for my wife. When we decided to try for Monkey I felt like I had won the lottery. She was initially more skeptical (surprise, surprise) about the prospect of having more than one child, but Yogi was changed her. Family life has changed her. Changed both of us.

So, how are going to do this and when?

As you may remember, we’re out of embryos (we got our lovely Monkey with our very last three), out of sperm and our donor has “retired”. Thanks to Schroedinger who mentioned in a post that she had gotten her donor “recommissioned” (love the word choice), I’ve been dreaming about driving out west and finding him myself. (There’s more to say about my feelings towards the donor – look for another post on this topic soon). Happily, someone in this family has some sense and so my wife went the sane route and got in touch with the Cryobank in early July. Last week we got the news that our guy has been found (he moved) and he’s willing to help us expand our family.

If this works out for us, my wife will carry the baby. This means that we’re looking at a second round of IVF. We’re going to put a bit more space between Monkey and #3 than we did between Yogi and Monkey. The ideal start time would be when Monkey turns two. This would put a little less than two years between Yogi and Monkey and somewhere in the neighborhood of three years between Monkey and the baby. I’d love to have less space between oldest and youngest, but I’d also like to maintain some shred of my own sanity.

I’ll keep you posted on any developments. I’m thinking five is a lovely number.

What I’ve Been Talking About

Looking for Something in Particular?